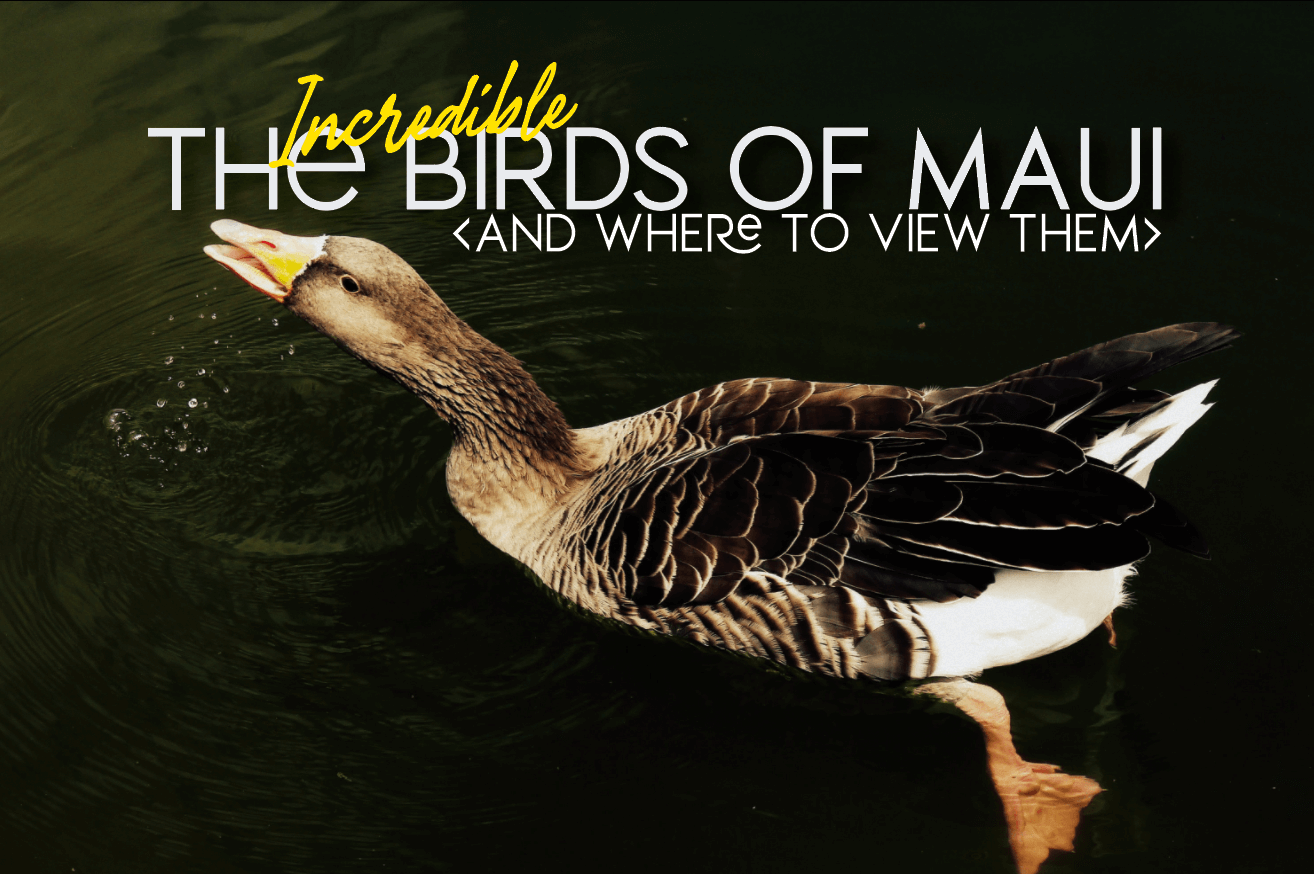 Bird watching on Maui is a no-brainer for any bird lover looking for an exciting trip away. As a destination, Maui is known for its extraordinary beauty, its wide biodiversity, as a home to rare birds, and a bucket-list trip for every member of the American Birding Association.

While strolling along Maui’s dazzling beaches, hiking through the tropical rainforests, or climbing the magnificent mountains, birders keep a close eye out for over 350 different species of birds. This guide will direct you to the best bird-watching spots in Maui, along with information on some of the amazing birds waiting for you to find on the island.

All Year Round Activity

Maui’s year-round warm weather makes for perfect bird-watching conditions. This gives you great flexibility when planning your trip. It also gives you more of a chance to see some of the endemic birds native to Maui, like the Nene, also known as the ‘Hawaiian Goose’. The winter months are a great time to visit Maui for bird watching as there will be many more birds due to migration season, as many birds migrate there for the Winter season. September through May is usually the best time to go birding on Maui.

You’ll be able to spot birds all time of the day, as it’s common to find some of the birds roaming around your complex or lodgings or sneaking in and around your condo for scraps! However, early morning is best to go bird watching as you will actively see the birds foraging for food, you know what they say.. the early bird catches the worm!!

Birds You Can Find On Maui

The Nene is one of the most popular endemic species of bird on the Hawaiian islands. The Nene was also designated the official state bird of Hawaii in 1957. These beautiful birds have long legs, a more erect posture and less webbing between their toes than other geese. The nene got its name from its soft, quiet call, it has also been known to moo like a cow! So don’t be confused if you hear this out on your hunt for this mysterious goose.

Most Nene are capable of flight but you are more likely to find them cruising near abundant vegetation. One of Nene’s favorite foods is the bright red ohelo berry that grows on lava, making Haleakala Crater on Maui a popular place to find Nene. They prefer to live in remote, less-trafficked areas and are to be admired from afar as they are listed as an endangered species.

The Cattle Egret was first introduced to the Island in 1959 as a way to control insects that were harassing the cattle herds, such as house fries and horn flies. Ironically, the Cattle Egrets have become quite the pest themselves as they now pose a threat to native water birds such as Hawaiian Stilts and Hawaiian Coots.

These 20-inch long white birds are quite easy to spot, usually found in large groups near ponds. The best time to spot these magnificent birds is later in the day, as they return to their roosts in trees about a quarter-mile from the wetland each evening at sunset.

The Hawaiian Stilt, also known as the a’eo, is another one of Maui’s rare birds as it is currently on the federal list of endangered species. It would be hard to miss this unique bird with its gangly pink legs, black and white feathers and long black beak. Their legs usually reach about 15 inches in length, which is the longest of any bird their size in the world.

They are known to be quite territorial and aggressive and have adapted a clever technique to ward off predators, whereby they band together and hop like crazy, flap their wings and let out a shrill, communal shriek, scaring away humans and predators. So just like the Nene, these endangered birds are to be admired from afar. You are most likely to find an ae’o at a pond or mudflat, feasting on fish, crabs, worms and aquatic insects.

The Zebra Dove, native to Southeast Asia, was introduced to Hawaii sometime around the 1920s. This bird got its name from, you guessed it, its zebra-like patterned feathers. It is brown in color with black and white stripes on its upper feathers.

They have a delightful, soothing call, described as a coo. This small, plump bird can be found nesting in bushes, trees, on the ground, and sometimes on ledges. These nests are usually made from simple materials like grass and leave so keep an eye out for them.

Zebra Doves are omnivores and feed on a mixture of seeds, grasses, and sometimes small insects. Like many other Doves, the Zebra Dove forages for its food on the ground, which is most likely where you will spot this little guy walking along. They’re also known to pay visits to the locals’ platform bird feeders, so lay one out and wait patiently to catch a glimpse.

Whether you’re an experienced bird watcher or just beginning to take interest in the hobby, Maui has an option for you. Although many of the brilliant birds can be spotted roaming the island freely, Maui has parks, gardens, and guided tours to help improve your experience and allows you to see some of the island’s rare birds up close and personal.

Some of Maui’s bird-watching hotspots and definite places to consider when planning your trip are; Kanaha Beach Park in Kahului, Kealia Pond National Wildlife Refuge in Kihei, Hosmer Grove in Haleakala National Park, and the Waikamoi Nature Trail on the Road to Hana.

To sum up, Maui is the ideal destination for a bird lover’s next trip. Enjoy this magical island while exploring some of the world’s rare avian species, like the endangered Hawaiian Goose, the quirky Ae’o, and many many more.

Explore these bird’s habitats with hand-curated trail maps, there to help make your bird-watching experience one to remember. From extremely rare and endemic birds to your common Zebra Dove, the island has such a wide variety of birds making it a bird watcher’s paradise.

What is Hawaii’s state bird?

The state bird of Hawaii is the Nene, also known as the Hawaiian Goose

Where is the best place for bird watching in Maui?

The best place for bird watching in Maui is the Kealia Pond National Wildlife Refuge in Kihei or the Haleakala National Park.

When is the best time to visit Maui for bird watching?

The best time to visit Maui for bird watching is September through May as the migration patterns bring many species to the warmth of the island.

Maui’s breathtaking natural beauty, resorts, and an assortment of tourist attractions make it a must-see destination to unwind or for adventure. There is so much…

Maui is the ultimate island for nature lovers and no visit would be complete without exploring the beautiful and diverse beaches here.

Surfers across the world eagerly await the winter months in Hawaii each year. This is when the north shores of Maui and Oahu get their…